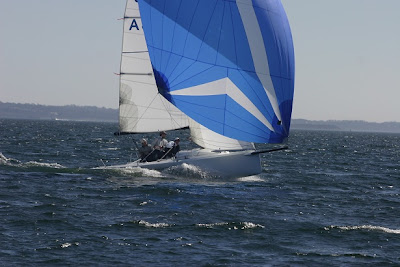 It’s almost impossible to comprehend; after nearly a decade of decline and a couple of years now with an overall fleet that’s around a third of its historic (2003) high-water mark, West Race Week – now rebadged Quantum Key West – is likely to have it’s first up year! And wonder of wonders, it ain’t because of TP52s or HPR or Melges 32s or any of the other high-dollar boats that KW spent so many years wooing.
Ironically, the smallest and arguably one of the most Corinthian boats of all is saving KWRW’s bacon (after the DeVos family and Quantum saved it from death last year); in fact an incredible thirty-seven  (read: 37) J/70s are registered as of today for 2013 Quantum Key West.

Other noteable classes forming up in bigger numbers than past years include the Swan 42 (7 entries) and the IRC52 (6 entries) and HPR class (8 entries), which are benefitting from a schedule that includes multiple Florida events this winter, including the US 52 SuperSeries stop that’s taking over where the Miami Grand Prix failed with a major March event in Florida’s showcase city.

But the J/70-fueled increase might mask some other things going on. It may not be America’s biggest and most important regatta anymore, but the timing and expense help clarify what’s going on in grand prix racing, if such a thing even exists anymore…
Note: The Farr 40 has just four entries as of the end of November.
Note: The Melges 24 is down to just 22 (though we expect a few more)
Note: Just seven Melges 32s are registered.
Note: Farr 30s don’t seem to be coming.
Note: J/80 and J/105 fleets are hanging on by a thread
Note: No PHRF class has more than four boats
Note: IRC is down to 12 boats. Outside the 52s, you have a 2-boat Mini-Maxi class and an IRC3 class that looks more like a clown car than grand prix racing.

All in all, Quantum Key West is finally starting to reflect the changing trends in racing that have been so obviously quantified in events around the country.
Most Americans want to sail smaller boats in more convenient locations, while the true Grand Prix boats are going for standalone events.

If we were going, we know what we’d sail: A J/70 with Quantum sails.